From WikiBound, your community-driven EarthBound/Mother wiki
(Redirected from Playable character)
Jump to navigationJump to search 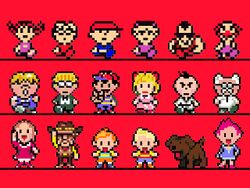 The cast of various party members, plus Flying Man, Porky, and Dr. Andonuts 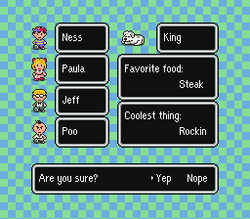 At the beginning of the game, players are required to assign names for their party

Excluding Teddy, the ages of the cast are found in Encyclopedia MOTHER:

In addition to this, there is also a temporary party member that is playable in game, who is:

Pippi is a 7 year old girl who temporarily joins Ninten at the beginning of the game. Unlike other temparory party members, she is interestingly the only temporary party member who can be controlled by the player. Another interesting fact is her stats are identical to Teddy's, this isn't noticed easily at first because Teddy joins at level 18, unlike Pippi who joins at level 1.

Only 3 characters can be in the party at a time. Normally Teddy replaces Lloyd once the player reaches Ellay, and then Lloyd replaces him on Mt. Itoi. Lloyd is the only party member required to beat the game, while Teddy and Ana are optional. Pippi must be returned in order to obtain the Zoo Key required to progress through the game, thus she cannot legitimately be a permanent party member.

Teddy has the potential to be permanently removed from the party, and the events related to him can be skipped entirely. Unlike Pippi, though, Teddy can be brought to the end of the game and has unique equipment only he can use.

Ana and Lloyd can also both be absent from or leave the party depending on the order the player's choices, such as using the Onyx Hook before the Fallin' Love dance scene on Mt. Itoi when Ninten is temporarily the lone party member, which allows the player to complete the game with Ninten alone. However, nothing ever prevents the player from allowing either to join the party again as what happens with Teddy.

Using sequence breaks there are different configurations for the party the player can have at the end of the game:

The four playable characters appearences in EarthBound have been noted to be very similar to the appearances of the characters in the predecessor (sans Poo and Teddy), and some fans consider them to be the same characters. Shigesato Itoi confirmed that he intentionally designed them to be similar to allow players to decide whether they're the same or different.

Unlike EarthBound Beginnings the ages were left vauge by Shigesato Itoi.

Before Chapter 4 each chapter has a different playable character assigned to the role of the chapter:

Flint is the main character in Chapter 1, where he is searching for his wife Hinawa who was killed by a Mecha Drago. Later his older son Claus goes to the mountains to get revenge on the Drago who killed Hinawa, and Flint goes off to search for him, but Claus was nowhere to be found.

Salsa is a monkey who is playable in Chapter 3, where he was captured by the Pigmask Army and is forced to work for Fassad in order to save his girlfriend.

Claus is Lucas's older twin brother who is briefly playable in the prologue. He helps Lucas defeat a Mole Cricket who challenges Lucas for a battle.