From WikiBound, your community-driven EarthBound/Mother wiki
(Redirected from Onyx Hook)
Jump to navigationJump to search

This is a list of miscellaneous items in EarthBound Beginnings.

Bread Crumbs (パンくず Bread Crumbs), or simply Crumbs, is an item which appears in one's inventory if the player has chosen to use a Bread, rather than eating it. If one uses a Bread, it will be rendered into crumbs and will be successively dropped as Ninten and his friends walk around, in order to leave a trail. If the crumbs then get used, it will transport Ninten to the origin of the bread trail, and it thus acts as an effective way to escape from tough or confusing areas.

"If you follow them, you will return to the place that you started."

The Dentures (いれば Dentures) can be found under a sign to the west of the only building which is present in the Mislay Triangle. Inside of the building lives a man, who according to a legend among the citizens of Reindeer, has not had a cold during the last 300 years. When first met, he talks incomprehensively, and Ninten must give him the Dentures to allow him to be understood. This will result in him telling Ninten about his secret of avoiding colds, which is revealed to be thanks to the use of Mouthwash. He will then fill the entire inventory of Ninten and his friends with Mouthwash, which later on can be purchased from a young boy in the house for $10 each.

"Brush, floss and see your dentist and you won't have to own a pair."

The FrndshpRing (ゆうじょうのゆびわ Friendship Ring) is an item that only appears in the Japanese version of EarthBound Beginnings.[1] It is completely useless, having no function whatsoever, and was replaced by the Repel Ring in the English prototype and the Mother 1+2 port.

The Last Weapon (さいしゅうへいき Final Weapon) can be purchased from the Mysterious Teacher for $1048, after Lloyd has joined Ninten's party. It is a gag item, as it tries to make the player think it's an item used in battle, but it only shows the text "You can't now.". When used on the field, it shows the text "If that is true, push the POWER off, but remember to hold in RESET!". Its only purpose is to tell the player that they can turn off their NES if they want the ultimate way to not have to fight any enemies.

The Map (ちず Map) only exists as an obtainable item in the Japanese Famicom version of EarthBound Beginnings. It can be found in a present in the basement of Ninten's house, where it is replaced by Bread in the English prototype and Mother 1+2 port. When used, it displays a scaled down, two-dimensional picture of the overworld and marks the current location of Ninten and his friends. It cannot be used inside of buildings and similarly isolated locations, nor can it be used while being in Magicant. In the prototype and Game Boy Advance port, the map can more easily be accessed by simply pressing the Start button. Nonetheless, it still remains as an item in the game's coding in these versions, albeit unused.[2] When the item is used in the Mother 1+2 version of the game, a short delay occurs before the map is shown.

The Ocarina (きぼうのオカリナ Ocarina of Hope), alternatively Ocarina of Hope, can be received from a citizen of Magicant, who resides in a building to the east of the entrance point, after talking to him. The ocarina is used to play the melodies which Ninten's party currently has learned. A person in a building in the northwestern area of Magicant will mention that he used to run a musical store there, but that the ocarina he ordered never arrived, and that he as a result has given up with maintaining the business, possibly referring to the one Ninten obtains.

"It can play a catchy tune."

The Onyx Hook (めのうのつりばり Agate Fish Hook) is first received after beating the The Fish in Magicant's Underground. It can be used anywhere to teleport Ninten and his friends straight to Magicant, which otherwise only can be reached by certain stones engraved with "XX". However, it cannot be used to leave Magicant, which forces Ninten to go through the underground tunnel again to leave Magicant before he or Ana learns Teleport. It is considered a very useful item, despite being optional. When Eve is in the party, this item cannot be used.

"As long as you have it, you can warp back to Magicant."

The Real Rocket (ロケット (ほんもの) Rocket (Real)) is a gag item, which can be bought from the Mysterious Teacher in Twinkle Elementary School for $3485. Immediately after it has been bought, a sound resembling the takeoff of an aircraft can be heard, followed by nothing else virtually happening, which generally makes it considered to be a waste of money to buy it. Also, because of this, the item does not have any in-game description, as it never shows up in one's inventory.

Red Weed (あかいくさ Red Grass) are plants that can be found throughout Magicant, and can be distinguished by their distinctive red color, in contrast to the other grass-like plants which are colored green. To obtain them, they simply need to be checked. There is a total of three red-colored plants, and every plant holds onto an infinite amount of Red Weed. In their current state, they do not have any real use, but when taken to Queen Mary's Fountain to in western Magicant, they will transform into Magic Herbs, and be able to replenish 30 HP each.

The Repel Ring (まよけのゆびわ Amulet Ring) can be purchased for $160 in the eastmost shop in Magicant, and the department store of Merrysville. When used, it will prevent Ninten and his friends from encountering enemies that are weak in comparison to their current stats. It will after a certain amount of time lose its powers, and must be rebought in order to reattain the ability. The FrndshpRing was replaced by this item in the English prototype version and the Mother 1+2 port.

"One look at this strange ring will drive away weak enemies." 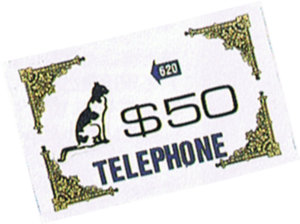 The Telephone Card (テレホンカード Telephone Card), alternatively Phone Card, can be used on all phones which require payment, making the phone calls free. The Telephone Card is obtained by taking a questionnaire from a person in Merrysville, who resides in between the town's hotel and department store. The card is charged with $50, and as it costs $1 to make a call, it can be used 50 times before reaching the credit limit.

In the Japanese Famicom version, the Telephone Card must instead be purchased for $50 in the department store of Merrysville, where it replaces the Repel Ring.

"USE this handy card to charge your phone calls."

The Time Machine with its event restored.

If hacked into the shop data in the prototype, it will still have the purchase price of $2775, but no events will activate, due to the coding associated with it being removed. In its place, the player can buy a Super Bomb. Using the item in the English prototype will display "Nothing happened.", and using the Look command will simply display the text "System Error!!!" due to it not actually being an item which goes into the player's inventory.

There are unused items in both the Japanese and prototype version of the game, which can be achieved through hacking.[2]

The IC-Chip is an item present in the coding of both the Japanese and prototype version of the game, where Lloyd appears to be the only character capable of using it, though a text saying "Nothing happened." appears when trying this. It is assumed to later have been changed into the Memory Chip in the Mother 1+2 version. The item can also not be dropped from the inventory, which strengthens this theory.

The PoisnNeedle and StoneOrigin have the same functions as the enemy attacks of the same names when hacked into one's inventory.