Magicant (Japanese: マジカント Magicant) is a location in EarthBound Beginnings. It is a world that was created and resides in Maria's mind and is ruled by her. Ninten first accesses this world by reading a passage of George's diary in front of a mysterious pink rock known as "God's tail"[1] in a cave, and he can return at anytime by using the Onyx Hook.

In EarthBound there also exists a variation Magicant, however it is different from this Magicant.

To the north of Queen Mary's Castle is a house containing five Flying Men. Upon spoken to one will assist the player in any battle throughout Magicant until he dies, then a gravestone will appear next to the house for each Flying Man who was killed in battle. Once all five Flying Men are killed they're all gone.

The north west section of the town has a hospital and a hotel. The hospital will restore heal any player with full HP and cure any status condition, including unconsciousness.

The hotel functions identically to the hotels in the real world and can be used for free. Resting in it will restore all party members to full health including Flying Man.

Outside of town in the forest to the left has a house with a guitarist who gives hints to where each of the melodies are located.

Ninten arrives here via using telepathy on a mysterious rock-like object outside of Podunk. He hears a voice speaking into his mind "Who has lost its tail?" (Japanese: "Where is God's tail?"), then by reading a passage from the Great Grandfather's diary, he warps into Magicant. He then goes to Queen Mary's Castle where he meets Queen Mary, who is the ruler of Magicant. She begs Ninten to learn a certain song she used to sing that is 8 notes long. Later, after Ninten collects all 8 of the notes, he and his friends return to Magicant to sing the song to Queen Mary (in the original Famicom version he instead returns to Magicant after collecting the 7th melody, then sings it to Queen Mary who remembers the 8th melody on her own). Upon hearing the full song, Queen Mary remembers that she is George's wife Maria, and that she raised Giegue as a child. She then joins her husband George in heaven, and in the process Magicant disappears. 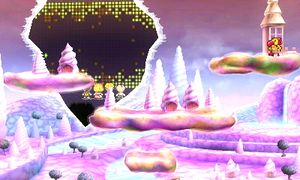 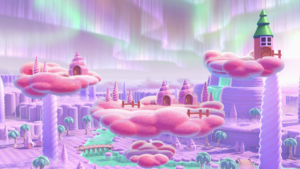 Magicant from EarthBound Beginnings appears as a stage in Super Smash Bros. for Nintendo 3DS, although it also has minor references to EarthBound's as well. The main feature in this stage are the Flying Men which assist the first player to reach them. They will fight for the player until they get KO'd. Similar to how they work in the EarthBound games, there are five in all, and once all five are defeated, none will respawn. In the background is a "rip" in the sky, showing scenes from Ninten and Ness's adventure. Other elements include a tree, a Mobile Sprout, a giant tomato, the Sky Runner, an octopus statue, and the Dungeon Man. Magicant also returns in Super Smash Bros. Ultimate and received a large graphical update. Gameplay wise, it is identical to its appearance in the 3DS version of Smash 4. Oddly Queen Mary's Castle is absent in both games it appears in.

"A magical world in Mother and EarthBound, brought to life by the memories of certain characters. In this game, Magicant is a cloud stage where giant tomatoes, metal octopuses, and even the Sky Runner may appear. Even the hulking Dungeon Man may show up. What an unusual battlefield..."