The user causes a lightning bolt to strike an opponent for electrical damage. In EarthBound Beginnings characters with, the Earth Pendant equipped will be resistant to it, while in EarthBound and Mother 3 the Franklin Badge will reflect the lightning back at the user.

In EarthBound Beginnings PK Thunder can be aimed at any chosen opponent, unlike in its successors. This is also the only game where the Franklin Badge will not reflect the attack, as instead it reflects the lethal PK Beam γ. Oddly PK Thunder does not have an Ω tier and only goes up to γ. The reason for this is unknown.

PK Thunder was completely overhauled in EarthBound and Mother 3. The move no longer allowed the user to choose a target, instead targeting a random opponent with a chance to miss. In Mother 3, its accuracy is noticeably higher than in EarthBound. The accuracy of PK Thunder is higher when more enemies are present. The number of times PK Thunder strikes increases with each tier: PK Thunder α strikes once, β strikes twice, γ strikes thrice, and Ω strikes four times. PK Thunder will also remove any PSI Shields that have been put up, and in Mother 3 it also has a chance of paralyzing a target.

The "Crashing Boom Bang" attack in EarthBound is functionally identical to PK Thunder β, and as such can also be reflected by the Franklin Badge in the same manner.

PK Thunder is Ness's up special move, available in all Super Smash Bros. games, and Lucas's Up special starting with his introduction in Super Smash Bros. Brawl. For both characters PK Thunder features a guidable ball of lightning that can move in any direction the player chooses, it will disappear after a while or if it touches a solid object. Both of their PK Thunder's are projectiles, and can be reflected with a move like Fox's Reflector 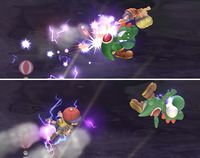 The player can redirect the ball of lightning to hit themselves and launch them like a missile. This attack has been dubbed by fans as PK Rocket or PK Thunder 2. PK Rocket is Ness and Lucas's main form of recovery in all of the Super Smash Bros. games, as the attack sends them a very long distance. However due to the startup, it can easily be intercepted.

PK Thunder functions slightly differently for both characters: For Ness it disappears upon hitting a character, however Lucas's doesn't. As a result Lucas's version is much safer as a recovery. Starting with Super Smash Bros. for Nintendo 3DS and Wii U Ness's version will not disappear until the "tail" fully appears. For PK Rocket, Ness's variant does a single blow with powerful knockback for a useful KOing option, Lucas's instead is a multi hitting attack and sends him a much greater distance than Ness's.

Ness has two extra versions of PK Thunder as custom specials in Super Smash Bros. for Nintendo 3DS and Wii U:

Because of Lucas's status as a downloadable character, he does not have custom variants of PK Thunder.