Paula (Japanese: ポーラ Paula), full name Paula Jones,[3] is a girl from Twoson, and is one of the main playable characters in EarthBound. She has advanced psychic powers, mainly wielding elemental PSI, and is shown to use telepathy as well. Paula is well-known throughout Twoson for her abilities, and helping out at Polestar Preschool.

She can also use the pray command in battle, which has a large amount of random effects. Among these effects include restoring HP to party members, making both enemies and the party cry, and reviving both unconscious party members and enemies.

Paula is a blonde haired girl with blue eyes, wearing a pink dress with a white belt around her waist. She has red shoes with white socks, and a red ribbon in her hair. Her clay model depicts her holding a handbag, however she never is seen having one in-game.

Paula lives in the town of Twoson in Polestar Preschool, which doubles as her home. Paula is a member of the Jones family along with her mother and her father Paul Jones.

In terms of her personality, Paula is a very kind and helpful young girl. The children at Polestar Preschool look up to her as a mother. Paula appears to have an interest in Teddy Bears, as she has a Teddy Bear in the cell with her when she is imprisoned by Carpainter, and she also has a Teddy Bear in her room at her house, inside a present.

In the Japanese release of Mother 2 she is depicted as also being weak and passive, to the point where she would have cried if Ness hadn't come to rescue her when she was locked up in the cell. In the English release of EarthBound, however, her stronger side is further shown as the line saying she almost cried was changed to say she would have tried to bust her way out if Ness didn't come. According to the English script writer Marcus Lindblom, he changed it intentionally as the original line made her seem very weak and sensitive, and he instead wanted to potray her as a forceful American girl with a "willing to destroy" personality.

Paula is noted for being very similar in design and personality to Ana from EarthBound Beginnings, and according to Itoi, this was done intentionally to allow the player to decide if they were the same character or not. 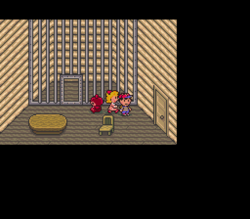 Ness rescuing Paula from the cell

In EarthBound, Ness first receives a telepathic message from her in his sleep after defeating the Titanic Ant. She has been kidnapped, and needs his assistance to break out. He travels through Peaceful Rest Valley and to a cabin owned by Everdred, where she is being held. Mr. Carpainter had kidnapped her, in hopes to use her as the "high priestess" for Happy Happyism. Paula tells Ness that Mr. Carpainter holds the key to her prison, and gives him the Franklin Badge for protection from his otherwise-deadly lightning attacks. After he retrieves the key, Paula joins his party, and accompanies him for the rest of the game. When the two of them get imprisoned in Threed by zombies, she sends a telepathic message to Jeff, urging him to go south from Winters to rescue them.

Later, in Fourside, she is kidnapped in the department store by the Dept. Store Spook, working for Mr. Monotoli. Ness and Jeff defeat the Dept. Store Spook, although by the time they do so, it is too late, and Paula is trapped in the Monotoli Building. The two of them go through Moonside, and destroy the Mani-Mani Statue that was possessing Mr. Monotoli. They then ascend the Monotoli Building, and upon reaching the 50th floor, Mr. Monotoli gives Paula back, and apologizes for the ordeal. Paula uses her gnostic abilities to sense that they must go back to Threed to reach Summers, where they find the now-repaired Sky Runner to fly.

In the final battle against Giygas, Paula uses her praying abilities to contact various characters they met on their journey, including the player. With everyone's powers combined, they all manage to defeat Giygas. At the end of the game, Paula receives a letter from the children at the Polestar Preschool, and Ness escorts her back home to Twoson.

Paula has the ability to pray (Japanese いのる Pray) in-battle, which has a variety of random effects. (For the unique event in the final battle, see above.)

Paula In the slideshow

In the New Pork City theater, Paula is briefly shown in the slideshow showcasing the Chosen Four throughout EarthBound. 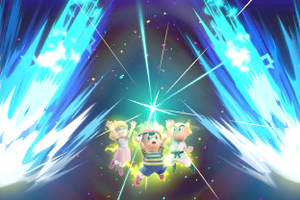 Paula is a PSI master who used her incredible psychic abilities to call Ness from afar. Ness rescued Paula from the blue-stained clutches of the Happy Happyist cult, and she became integral to his EarthBound adventure. Originally, Ness didn't know either PK Thunder or PK Fire, so Paula probably taught him these techniques.