For the song named after them, see Flying Man (song).

Flying Men (Japanese: フライングマン Flying Man) are a mythical species of birds with distinct human qualities. Flying Men are bipedal creatures that live in groups in different Magicants. They are very kind and are always ready to help. Ninten or Ness may decide to take a Flying Man with them while in Magicant, where they will help them in battle with enemies. They cannot be taken out of Magicant, however. If a Flying Man happens to fall in battle, a grave will be set up by their home. In Earthbound, their tombstone has different inscriptions for each Flying Man, getting more dismal with each death. The fourth Flying Man warns the player not to 'treat us like trash'. Flying men cannot be revived. In both EarthBound and EarthBound Beginnings, there are only five Flying Men available. Flying Men are said to represent either Ninten or Ness's courage.

Flying Men also appear as a Mii Brawler Costume, being released in the third wave of DLC costumes in Smash 4. They make a reappearance in Ultimate, this time purchasable from the shop.

The Flying Men are a team of five birdmen. Each time a Flying Man appears, he'll help the first person to reach him with Flying Cross Chops and Somersault Kicks. A small memorial stone will be erected for each one defeated. Once all five are gone, they're done fighting forever until the next battle. 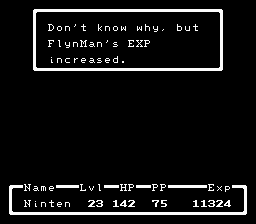