Clay model of the Mani-Mani Statue

The Mani-Mani Statue, or Evil Mani-Mani, is an item that Giygas used during the events of EarthBound to help spread his evil influence. It is seen multiple times throughout the game. The first time is optional, but adds more background to where it came from. It plays a large role in the game.

At the beginning of the game during the meteorite crash, Ness can speak with Lier X. Agerate. He will seem uneasy and worrisome. If he talks to him after returning home and going up to find Picky, he will tell Ness to return alone later so he can show him something. The next morning, if Ness does return, Lier X. Agerate will run down underground into a cave. At the end, Ness will see the Mani-Mani Statue, and if he checks it, the message: "(The Golden Statue is glowing strangely...)". 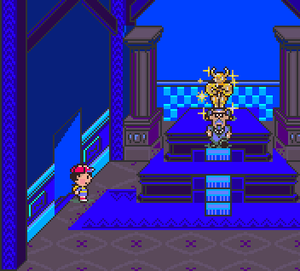 Later in the game, Ness will go to Happy Happy Village to try and save Paula. He then realizes that the town isn't normal. The residents will mention a man named Carpainter. Ness can meet Mr. Carpainter in a building and offer for him to stay the night, but only if he converts to Happy-Happyism. Throughout the town and a nearby cave, Ness will meet some enemies that are his pawns: the Insane Cultists. When Ness goes to see Paula in her prison, she will tell him that Carpainter has the key to the door keeping her locked up. Ness must then go to a large building and fight Mr. Carpainter. Behind him in the back room of the building, is the Mani-Mani Statue. After the battle, Carpainter will tell him that the Mani-Mani Statue had an evil influence over him. 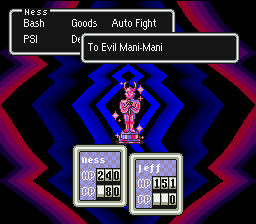 The battle with the Mani-Mani Statue.

When Ness, Paula, and Jeff reached the big city of Fourside, they eventually found themselves in a large department store. When they tried to leave, Paula was kidnapped. Ness and Jeff soon found the kidnapper in an office in the store. They fought the Dept. Store Spook, who tipped them that Paula was with Monotoli. Soon the two found Everdred lying in an alley. He told them to check behind the counter of Jackie's Cafe. When they did, they found themselves in the backwards world of Moonside. After wandering around, they found the Mani-Mani Statue unprotected. They engaged in battle with it. They destroyed the statue, and wound up in the back room of Jackie's Cafe. A message will appear saying that Moonside was all just an illusion. After finally making it up the Monotoli building, Mr. Monotoli, who will tell Ness, Paula, and Jeff more of the Mani-Mani Statue. He will also talk of its evil influence. He will also tell them of what he heard while in possession of it. He said he heard the word "Giygas" and "Don't let them go to Summers". He also said he hid it in the storage room of Jackie's Cafe.

The Mani-Mani Statue appears in Moonside as a boss, called Evil Mani-Mani. It knows various PSI maneuvers such as PSI Magnet and Paralysis.

"The Statue puts up a better fight than Carpainter did back in Happy Happy Village, but you should be able to beat it without difficulty. Just make sure you go into the battle fully powered up."