Fourside (フォーサイド Fourside) is a location in EarthBound. It is the largest city in Eagleland, being the metropolis of the region, and the location of the fifth Sanctuary, Magnet Hill. Continuing with the number pattern, it is named after the number four as it is the fourth major city visited in the game. Fourside has a population of 313,003 people, average rainfall of 32 inches and 10 parks. Its major industry is finance and has an average income of $59,000. [1]

Fourside is based on New York City, as the EarthBound Player's Guide states while mentioning the skyscrapers, bustling streets, and shady politicians. The city's layout is similar as it consists of large skyscrapers and a park in the center, possibly based on Centeral Park. The bridge that connects to the city is based on the Brooklyn Bridge and the Topolla Theater (Named Topollo Theater in Japan) is based on the Apollo Theater. Additionally, New York City's nickname is "The Big Apple" and the EarthBound Player's Guide parodies this by mentioning Fourside's nickname is "The Big Banana".

The city is accessed from the west via a long bridge over a wide river. The city's mayor, Geldegarde Monotoli, was responsible for the major development of the city after succeeding the city's previous mayor, Enrich Flavor. Many citizens believe Monotoli hitting the office was highly beneficial to the city, until recent events in the game have caused many to have suspicions of him. Fourside's buildings are uniquely built in a diagonal pattern unlike other towns. The majority of the buildings are skyscrapers, some of which being apartment buildings while others are businesses.

Being a large city, it features many things to do. In the center of town is the central park where the dinosaur museum is located. The city is famous for being home to the major entertainment center known as the Topolla Theater, housing famous singers including the Runaway Five. Fourside also features a large, three-story department store named the Grand Department Store. The recent strange events have caused the department store to be closed, however, until Ness frees the Runaway Five once more from their dept. Other businesses include a bakery near the department store where Penetella Giovanni can be found, the Monotoli Grand Hotel located on the western portion of the city, the hospital in the far north, and Jackie's Cafe which serves as an entrance to Moonside.

The Monotoli Building is the city's main office building owned by the the mayor Monotoli. It is likely based off of the Empire State Building. Prior to this, it was known as the Enrich Flavor Building. The building is the largest building in Fourside, being 48 stories high. Visitors of the building are only allowed up to the 47th floor as the highest floor is where Monotoli's head office is located. During the game's events, Porky became a resident of the building for giving Monotoli political advice. Porky's advice, combined with Monotoli being under the influence of the Mani-Mani Statue, are responsible for the recent strange decisions being made by Monotoli.

Topolla Theater is the major entertainment center of Fourside. The theater is where the Runaway Five perform after leaving the Chaos Theater, and has recently been joined by the famous singer Venus.

The Fourside Grand Department Store is a large shopping center in the city, as well as being the largest store found in Eagleland. The store is four-stories high and uses escalators to travel between floors. Naturally, it has more businesses inside than anywhere else in the game.

Moonside is an alternate dimension created in the warehouse of Jackie's Cafe using an illusion from the Mani-Mani Statue. It is based on Fourside, however it is much darker with the buildings and trees being outlined with flashing neon lights. The citizens all speak in bizarre ways, with "yes" and "no" being reversed. Many of the people will teleport the player to different locations upon being spoken to. Its name is likely are reference to how the moon has four phases.

When Ness, Jeff and Paula arrive in the city, they find the Runaway Five performing at the Topolla Theater. The band was once again conned by the theater owner into an uneven contract and are in dept. When Ness, Jeff and Paula have defeated the five Guardian Diggers in the Gold Mine, and then go to Fourside, they are given a diamond by George Montague on the way there. To pay off the Runaway Five's debt, Ness gives the diamond he was given earlier to the owner of the theater, which once again frees the band. Later, the trio explores the department store. During their visit there however, the lights go out. Paula is kidnapped by a suspicious being during the phenomenon, and the creature then calls on Ness. Ness and Jeff go to the top of the store, and find the creature, revealed to be a Dept. Store Spook. A battle is engaged with it, and after it has been defeated, it briefly mentions someone named Monotoli, before disappearing, without any traces of Paula. The due search the city for her and come accross Jackie's Cafe. When they exit, they meet Everdred, whom they met earlier in Twoson, and he is badly injured. A crowd is gathered around him and he tells Ness about how he stole an item from Mr. Carpainter. He decided to sell it in the city, but got tricked by Geldegarde Monotoli. However, he then tells Ness Mr. Monotoli is being controlled by the Mani-Mani Statue. His last request is for Ness to check behind the counter in the cafe. However, when he does that, he and Jeff are sent to Moonside.

At various points of the city, there are persons who sends the duo to the Monotoli Building. However, a man blocks the path, who will only let Ness and Jeff go past him if they bring someone whose eyebrows are connected and has a gold tooth. Ness and Jeff then meet a person, who teleports them to a building. Here, they meet an invisible man, who goes with them when they're teleported from the building. He follows them around, and when they meet the man blocking the path, he sees the invisible man as the person with connected eyebrows and a gold tooth. They leave, and the duo face the Mani-Mani statue. When the statue is destroyed, they find out that they were in the cafe's warehouse the whole time as the Mani-Mani Statue had created the illusion of Moonside, and with the statue destroyed the illusion ceased. They leave the warehouse and recieve a call from Apple Kid, and sends his latest invention, the Gourmet Yogurt Dispenser, to him via Escargo Express' neglected class. Outside they meet Monotoli's maid Electra, eager to try the Trout yogurt made by the invention. She makes a deal with Ness and Jeff to allow them into the higher floors of the Monotoli Building if they bring her the Yogurt dispenser. The invention was unfortunately dropped in the desert forcing the two to search for it in the Monkey Cave. Once the invention is retrieved, Electra allows Ness to enter the Monotoli Building, where Paula is held captive. Ness rescues Paula from Monotoli, who explains he was under the influence of the Mani-Mani Statue as well as where the team should go next.

When Ness returns later, he and his friends learn about the fifth Your Sanctuary location found at the end of the sewers. Mr. Spoon makes a deal to allow the party to enter via a manhole in the Dinosaur Museum if they bring him Venus's autograph. They watch her performance at the Topolla Theater then obtain her autograph on a banana peel, then bring it to Mr. Spoon. With the entrance opened, they travel through the sewers to defeat the Plague Rat of Doom and earn the power of the fifth Sanctuary.

The hotel in Fourside charges $75 per person for a one-night stay.

Reviving an unconscious party member is $150. The healer at the hospital charges $100 for softening diamondization, $90 for healing paralysis, and $80 for exorcising ghosts. A checkup for other status effects by the doctor is $60.

In the Super Smash Bros. Series 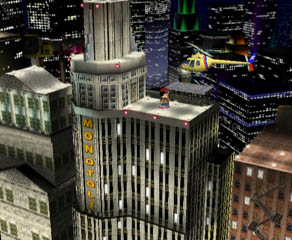 Ness on the Fourside stage in Melee.

Fourside appears as an unlockable stage in Super Smash Bros. Melee. It is a large stage where fighters fight on top of rooftops, one of which is the Monotoli Building. The U.F.O. from the intro to Earthbound appears here. It strangely has a slippery surface. When the UFO appears, the soundbite from the "The war against Giygas" screen plays. Despite being set in the day in EarthBound, Fourside is set at night. This may be a reference to Moonside, As Moonside's dark palette gives it the nighttime appearance.

Fourside has many events here. An event called Gargantuans has a Giant Bowser fighting a Giant Donkey Kong, a Tiny Mario and a Tiny Peach in a homage to King Kong and Godzilla films. An event called Space Travelers has Ness defeating Samus, Kirby, Fox, Captain Falcon, and Falco, who are many playable characters from "space". The first 3 fighters start at Fourside while the last 2 fight at Battlefield

Fourside returns as a stage in Super Smash Bros. Ultimate, this time it's available from the start. The stage recived a major graphic overhaul, although layout wise, it is unchanged from Melee. Several more EarthBound references appear on this stage: the roof of the building on the right is painted blue as a reference to the Happy Happyists, and the same building has clothsline with an orange Hawaiian shirt and sunglasses, the same clothes worn by Everdred.