Stonehenge is a location in EarthBound found located north of Dr. Andonuts's lab in Winters. It is based off of the actual Stonehenge landmark found in Wiltshire, England. Below the actual monument is Stonehenge Base, where the Starman Deluxe, one of Giygas's minions resides. Several people such as Apple Kid and Dr. Andonuts were taken captive in to the base.

It is divided into two segments: the first segment is in a dark environment with narrow, purple-colored ground. Past where the eraser statue is it follows a zigzag pattern south. It then makes a left turn through a cave passageway, then down to a wide area with a fork, both paths will soon meet. Both paths pass through a cave passageway then meet near a Spicy jerky, as it continues east in a winding pattern. At the wide area, the path leading east then turns up to a dead end where a Guts capsule is placed, while south follows an S like pattern then left. Finally, it enters a cave passageway followed a loop around, then turns right to a wide area with branching paths. The upper path leads to a Cup of lifenoodles, while the other will lead into the second area of the base.

The environment switches to a dark factory-like environment. Progressing through requires going down the ladder, as turning right from the entrance leads only to a Broken harmonica. At the bottom of the ladder, the path goes right then down a long ladder, then right into a room where an Exit mouse can be taken. After that room is an area with several forks, then following that the area where the captives are held in fluid filled tanks. Past that is where the main henchman in charge of Stonehenge Base is found, the Starman Deluxe. Defeating it will cause the base to cease functioning and all enemies will disappear.

Starman Supers, which have a 1/128 chance of dropping Poo's only weapon, the Sword of Kings, can only be found in this area. As all enemies will disappear after the Starman Deluxe is defeated, this item will become unobtainable from that point on.

Stonehenge appears many times in EarthBound, the first few times being only walked by. While it can technically be entered, it cannot be explored as an iron eraser-shaped statue is blocking the path. Stonehenge Base is first entered after getting a call from Apple Kid and subsequently his pet mouse, who tells Ness of Apple Kid's kidnapping in Winters. The mouse provides the team with the Eraser eraser to remove the eraser statue blocking the deeper areas of the base. Once inside, Ness and his friends find many strong enemies and servants of Giygas. After trekking through the cave and factory portions, they find a room filled with giant capsules with people trapped inside, unable to breath in a strange liquid, including Dr. Andonuts, Apple Kid, and Jeff's friend Tony. In the next room, Ness, Paula, Jeff, and Poo fight the Starman Deluxe to save everyone and shut down Stonehenge Base. Afterward, the group continues to Onett to get the book "Overcoming Shyness" from the library for the Tenda tribe. 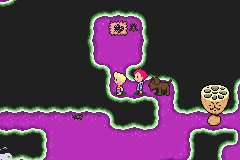 The Mole Cricket Hole in Mother 3
Retrieved from "https://wikibound.info/w/index.php?title=Stonehenge&oldid=39593"
Categories: