Jeff Andonuts (Japanese: ジェフ Jeff), is a boy from the town of Winters, and is one of the main playable characters in EarthBound. Although he does not have the ability to use PSI like his fellow teammates, he is very intelligent. He uses his knowledge to repair broken items, and use them in combat. His father is Dr. Andonuts, well-known for being a brilliant scientist. Jeff also has the ability to spy on enemies.

Jeff has blonde hair with freckles on his face. He wears a green coat and pants, with a black bowtie on his white shirt. He also wears white rectangular glasses and brown shoes.

Jeff lives in the snowy England inspired country of Winters in the Snow Wood Boarding House school. Jeff's personality is shown as being shy, clumsy and wreckless, and he also admitted he is nearsighted. He is, however, very smart individual, reflected by his high IQ stat. He is able to repair broken items into weapons or other useful goods throughout the night. Initally Jeff is seen as being very distant from his father Dr. Andonuts, who he hasen't seen in ten years, to the point where he wouldn't acknowledge him as his father. As the game progresses they begin to grow closer to each other, and in the ending Jeff says he would like to spend more time with Dr. Andonuts, who he finally acknowledge as his father.

His design is comparable to Lloyd from EarthBound Beginnings, as they have a very similar design, though Lloyd instead has gray hair and wears a red t-shirt with black shorts, and his glasses are more circular. Interestingly, early concept artwork of Jeff shows him wearing a red t-shirt with brown shorts, and wearing round glasses, making him look more closely to Lloyd. 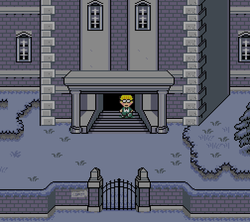 Jeff has lived at the Snow Wood Boarding House ever since he was an infant. He is close friends with Maxwell and Tony, who also live there. One night, he recieved a telepathic message from Paula, telling him that he is the only one who can save them. Tony momentarily comes with him around the boarding house to help him break out, and Maxwell supplies him with the bad key machine. After jumping over the boarding house's gate, Jeff picks up the Bubble Monkey from the local drugstore and begins to head south. When they reach Lake Tess, they encounter Tessie, and ride on her to southern Winters. They then go through Brick Road's maze, and pass through Rainy Circle as well. While Bubble Monkey leaves Jeff for a girl monkey, Jeff finds his father's laboratory, and briefly reunites with him. He takes the Sky Runner to Threed, crashes into Ness and Paula's dungeon, and uses the bad key machine to help them break out. Jeff then accompanies them for the rest of the game.

Later, in Fourside, Jeff helps Ness in rescuing Paula from Mr. Monotoli. He also repairs the Sky Runner that crashed in Threed so they can fly to Summers, along with the yellow submarine in Dungeon Man in order to get to Deep Darkness.

At the end of the game, Jeff leaves his friends to stay with Dr. Andonuts, and also recieves a letter from Tony.

Jeff has the ability to Spy (Japanese:チェック Check) on enemies, which lists their offense and defense, along with one of their PSI weaknesses. If there would be an item dropped at the end of battle, Jeff will steal it from the enemy (if there are free inventory slots).

It is an enhanced version of the Check command found in Mother, and was succeeded by the Sniff command in Mother 3.

Jeff can repair broken items when he rests at a hotel. The chances of him repairing an object depends on his IQ, and the amount of attempts he has tried to repair any objects.[1]

Another of Ness's close friends in EarthBound, Jeff is the only son of the famous scientist, Dr. Andonuts. Jeff is a mechanical genius, able to turn common, broken tools into complex weapons like the Hungry HP-sucker and the Slime Generator. He's a bit on the shy side but incredibly intelligent and brave in the heat of battle.

Dr. Andonuts's son, who attends a boarding school in Winters. He receives a telepathic message from Paula saying that she and Ness have been captured, and he sets out to rescue them. He's Ness's age but has the knowledge of an established scientist. He repairs broken items and makes them into other things. As his IQ increases, so does the number of things he can create.

One of the main party members in EarthBound, he attends Snow Wood Boarding School in Winters. Jeff takes after his inventor father, Dr. Andonuts, creating devices in his free time. One of these is the bottle rocket, which fires one large missile and four smaller ones. And sometimes one extra!

Much like Ness, Jeff originally was not intended to have an official age during development. His age is vaguely mentioned in the EarthBound Player's Guide and trophy in Super Smash Bros. Brawl, where it says he is the same age as Ness.[2] However, due to Ness's age being inconsistant across regions (12 in Japanese guides, and 13 in the EarthBound Player's Guide), it is unclear how old he is exactly.