Onett (Japanese: オネット Onett) is a town in EarthBound located in Eagleland. It is home to a number of key characters in the game, among them being Ness and Porky Minch. Onett is where the game's protagonist, Ness, begins his adventure. The town was once harassed by a gang called The Sharks, led by Frank Fly. Onett has a population of 3,500 people and two dogs, an average temperature of 72°F, and an annual rainfall of 10 inches. [1]

Onett's name derives from the number one, a reference to this being the first town visited in the game.

Onett is the first town in the game, and is Ness's hometown. At the north end of the town is Ness's house, along with his neighbor Porky's house. West of Ness and Porky's houses is a hill, of which in the nearby cliff is Lier X. Agerate's house. At the very top of the hill is where a meteor landed at the beginning if the game. On the western side of the hill is the traveling entertainer's shack and the caverns leading to Giant Step, the first Your Sanctuary of the game.

Going south of Ness's house is the main area of the town, where most of the businesses are found. The building located north is the library where Ness can borrow a map. South of the library is the drug store, with the burger shop right next to it. The building in the center is the Town Hall where the irresponsible mayor B.H. Pirkle resides. East of the Town Hall is the hotel which costs $35 per person, and south of the Town Hall is the hospital. The southernmost businesses is a Mach Pizza joint (although it has not opened yet), and an arcade, a bakery, and a police station.

Continuing south is a road that connects Onett to the town of Twoson.

The western cape, Beak Point, contains a house which Ness may buy for $7500, containing a Photo-Man location and a magazine with an excerpt of My Secret Life.

Located in the far north of town. The player can recieve a map, and later on the player comes to recieve the Overcoming Shyness book.

The clubhouse is located in a small forested area behind the library. Ness can talk to one of the kids there who will give him a Mr Baseball Cap for free. 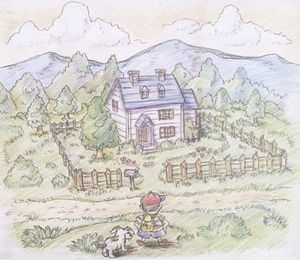 Concept art of Ness, accompanied by King, looking down at his house.

Onett is set within many natural surroundings, such as hills and forests. In particular, it is set at the foot of a mountain, with the inner city being on mostly even ground. The EarthBound Player's Guide states the town is lined with maple trees, with the leaves becoming many different shades of yellow and orange during fall. Onett appears to be set in a more rural location, as it uniquely is the only major settlement that is not connected to other major towns with a paved road and bus route. The northern parts of town consists primarily of hills, with the summit being where the meteor landed at the beginning of the game. Within the range of hills is the Giant Step to the west, which has many caves connecting different parts of the area.

The southern parts of the town are surrounded with many trees which extends to the east and north, until it comes it contact with the northern hills. A dirt road cuts through the trees which leads south to Twoson. The far west of the town reaches the Beak Point along the coastal cliffs.

At the start of the game, a meteor falls down, which wakes up most of the town. Ness's sneaks out of his room to see the meteor, and finds Porky, who says that he should go home, and that he will tell more about the meteor tomorrow. Later on, Ness is woken up by Porky knocking on his door. He tells Ness that he took his younger brother Picky to see the meteorite, but Picky got lost, and he forces Ness to help him find Picky so that he doesn't get in trouble. Once Ness agrees, they return to the site where the meteorite landed where they find Picky, who fell asleep. Picky explains that it was actually Porky who got scared and ran away and that he was looking everywhere to find Porky. As they leave, Porky hears a buzzing noise and the meteorite glows and Buzz Buzz, a bee like alien, emergers from the meteorite. He explains Giygas's plan to destroy the universe, telling Ness that he and three other people are the chosen heros, and helps Ness as he leaves. After they are confronted by a Starman Jr. and defeating it, Porky and Picky are returned home, where the two are in trouble for being out after dark. Lardna mistakes Buzz Buzz for a dung beetle and kills him, but before dying, Buzz Buzz gives Ness the Sound Stone and tells him about his special Your Sanctuary locations, with the first being the Giant Step, and sends him on his journey.

Dawn breaks as Ness leaves the Minchs' house, Ness then heads south to the main part of town, where The Sharks, the local gangsters, are causing trouble. The Sharks had trashed the Traveling Entertainer's Shack, which is the only entrerance to the Giant Step. Due to this, the mayor B.H. Pirkle had locked the entrance to the shack. Ness defeats their leader Frank Fly, who disbands the gang, and goes to the Town Hall and recieves the key to the shack from the mayor. Ness now has access to the shack, where he can then enter the Giant Step to reach his first Sanctuary. After defeating the Titanic Ant he returns to town where he is arrested for trespassing, and is taken to the Onett Police Station. The police force attempts to challenge Ness, but fails, allowing Ness to travel to Twoson.

Ness returns later in the game to borrow the Overcoming Shyness book from the library to lend to the Tenda tribe to help them become social.

Near the end of the game, Ness once again returns to Onett at night to retrieve the Zexonyte from the meteorite, this time Giygas has begun his invasion and the town has become dangerous. The people have locked themselves in their houses, including Ness's family (sans his father), though Ness's mother still heals him when spoken to. Ness braves the invasion collects the meteorite piece.

After Giygas is defeated, Onett was returned to normal and Ness is welcomed home.

Onett Bakery is located to the south of the town.

The burger shop is at the northern section of town, beside the Drug Store.

The Drug Store is located next to the burger shop. 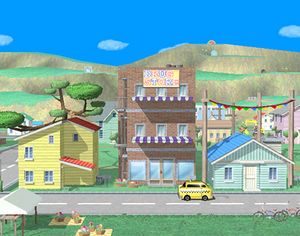