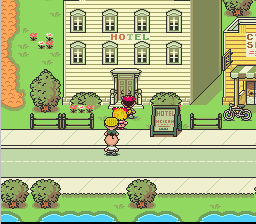 Ness and friends in front of the Twoson hotel

Hotels are services in EarthBound Beginnings and EarthBound. They can usually be known as buildings with HOTEL written on the front. Travelers can stay at hotels for short periods of time, but must pay to stay for that time period. They recover HP and PP fully, although they do not recover status ailments.

Hotels are important buildings normally found in every town, which allow players to rest for a night to fully restore all HP and PP. Each hotel requires a few to be paid in order to stay, which adds up for each character staying. The fee to stay generally gets higher for the later towns visited in the game. There are a select few hotels in more rural locations which can be stayed in for free.

In EarthBound Beginnings all hotels have two rooms and most hotels are either two or three stories high. The first floor is always front desk and the rooms are on the second floor. The three story hotels having a restaurant on the top floor which doesn't serve any in-game purpose. Snowman and Youngtown's hotels are the only ones that are one story.

Hotels return in EarthBound fulfilling the same purpose. Hotels are usually two stories with two rooms, save for a few exceptions. Most hotels now include a black phone on the first floor next to the check-in desk, and in the back room on the first floor ATMs can also be found. When staying in a hotel the player now wakes up in a room on the second floor instead of reappearing at front desk. On the second floor the bellhop next to the room stayed in will read a newspaper when spoken to alluding to recent events that happened in the respective town. One hotel in Threed traps Ness and Paula, leading to them contacting Jeff. If Jeff rests at a hotel with a broken item, he may be able to repair it there overnight.

In Mother 3 the hotel's function has been combined with hospitals and replaced with hot springs, which also recover status problems. However a single hotel exists in Tazmily Village being the Yado Inn, which can be used prior to Chapter 4 serving the same purpose as hotels in the first two games.