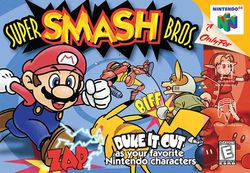 This game was the first in the series, first released in January 1999 (Japan) and April 1999 (United States). The game contains 12 playable fighters: 8 are playable from the start, and 4 are unlockable. The game has 9 playable stages, with 1 being unlockable. It had Ness, the star of EarthBound, as an unlockable character. Ness is unlocked by playing 1-player game on normal difficulty or higher, having 3 stocks or less, and completing it without using a continue. This game debuted on the Nintendo 64 before being available on the Virtual Console part of the Wii shop channel. 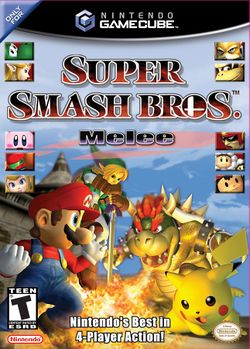 This game was the second in the series, first released November, 2001 (Japan) and December, 2001 (United States). It showed the stages of Onett and Fourside, as well as the return of Ness, this time not being needed to be unlocked. This game was released on the Nintendo GameCube. 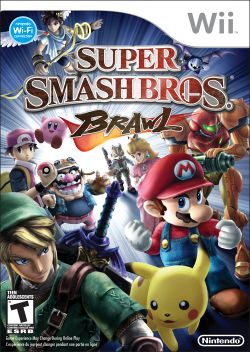 The third game in the series, released in January 2008 (Japan) and March 2008 (United States) after many delays. Players now can play as Lucas, who is a character available from the start. Ness is again unlockable, as he was in the original Super Smash Bros. game. This game is available to be played on the Nintendo Wii. It also featured the return of the Onett stage, under the Melee stages category, as well as the introduction of the New Pork City stage. Said stage also features the Ultimate Chimera.

The Subspace Emissary stars every playable character in the game, which includes Ness and Lucas. It also features Porky as a boss, inside of a machine, as well as the King Statue,known in this game as the Porky Statue, appearing as a hazard in the Ruined Zoo level. Later, the three are seen in the Great Maze level. 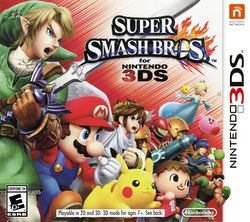 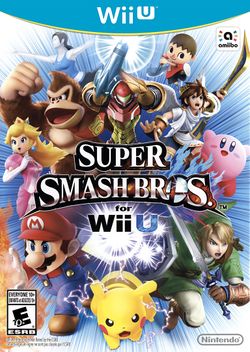 Boxart for Super Smash Bros. For Wii U

Ness appears in both versions of Super Smash Bros. 4, as an unlockable character in the 3DS version, and as a starter character in the Wii U version. Magicant appears as a stage in the 3DS version, with its design based on the Magicant from EarthBound Beginnings, while Onett from Melee returns in the Wii U version. Jeff and Starman appear as Assist Trophies, and Lucas from Mother 3 has returned to this game as DLC on June 14, 2015. 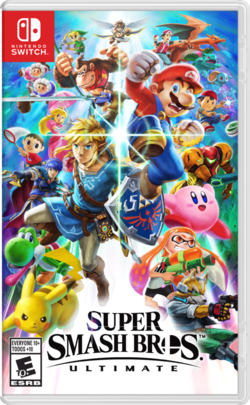 Super Smash Bros. Ultimate, released on December 7, 2018 for the Nintendo Switch, features Ness and Lucas as unlockable characters. Jeff and Starman return as Assist Trophies. The Ramblin' Evil Mushroom is a new item, with Mr. Saturn and the Franklin Badge returning as items from Melee and Brawl, respectively. Onett, New Pork City Fourside and Magicant also return as stages. 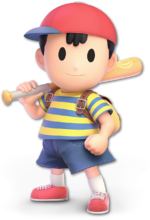 Ness, the protagonist of EarthBound, first appeared in the Super Smash Bros. series in Super Smash Bros. and has been playable ever since, being a member of the original 12. Many were surprised to see Ness in his debut in Super Smash Bros., particularly outside of Japan, where he was initially thought to be a curious cult character of Nintendo's '90s days, however he has become one of the most beloved characters in the series since. The series has considerably boosted his public appearance to the point where Ness is recognizable among Nintendo fans. Ness uses a variety of PSI attacks for his specials, being PK Flash, PK Fire, PK Thunder, and PSI Magnet, and his final smash is PK Starstorm. Other attacks he uses are his baseball bat for his side smash, and his yo-yo for his up and down specials. In EarthBound Ness could not learn PK Fire, PK Thunder, PSI Magnet, or PK Starstorm, instead Paula uses the former three, while Poo uses PK Starstorm, with PK Flash being the only move he could originally use. The trophy description for Paula in Melee mentions she possibly taught Ness how to use those PSI attacks, and his PK Starstorm trophy in Brawl mentions Poo taught him how to use it. 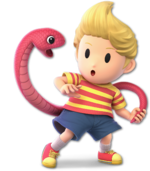 Lucas first debuted in the Super Smash Bros. series in Super Smash Bros. Brawl and has been playable in every game since. Lucas was also a surprise to see as he was from a Japan-only game, however much like Ness his appearance was much applauded. Lucas shares several attributes with Ness, especially in his special attacks, however he has many differences from Ness to the point where he is his own unique character. PK Freeze is Lucas's unique special move, while he shares PK Fire, PK Thunder, PSI Magnet, and his final smash PK Starstorm with Ness, however all of them function differently from Ness. Lucas also uses a stick for his side smash, while his up and down smashes uses hexagonal PSI attacks, presumably PK Love. Much like Ness, Lucas could not use PK Flash PK Fire, PK Thunder, PSI Magnet, or PK Starstorm, instead they are learned by Kumatora. Like Ness it is assumed that Kumatora taught Lucas how to use them.

All stages from past titles return in Ultimate: Onett and Fourside return from Melee, New Pork City returns from Brawl, and Magicant returns from Smash 3DS. All of them, most notably Magicant and Fourside, have received overhauls in graphics, as well as additional details.

Onett is based off of Ness's hometown in EarthBound. It first appeared in Super Smash Bros. Melee and has been in every game since, excluding Super Smash Bros. for Nintendo 3DS. The stage consists of two houses on each side with the drug store in the middle, with awnings acting as soft platforms. Cars will occasionally drive past from the right with a warning sign signaling when they're coming, running over anyone in their way.

In the background one can see Ness's house beside his neighbor Porky's, and the meteor on the top of the mountain.

Fourside debuted in Super Smash Bros. Melee and returned in Super Smash Bros. Ultimate. The stage is set in the city of Fourside at night with three skyscrapers acting as the main platforms: the Monotoli Building in the middle, the Dinosaur Museum to the left, and an apartment building to the right. The narrow pits make it difficult for Ness and Lucas to recover as there is not enough room to properly use PK Thunder as a recovery. Sometimes the Monotoli helicopter can land on the Monotoli Building, however it doesn't affect the gameplay in any way. A UFO can sometimes appear and float above the stage, functioning as a temporary platform until it disappears thirty seconds later. Fourside taking place at night may be a reference to Fourside's alternate dimension Moonside, as Moonside's dark coloration gives it a nighttime-like appearance.

In Super Smash Bros. Ultimate the stage's graphics have been remastered, while gameplay wise it remains the same. The apartment building to the right now has minor EarthBound references, such as a clothesline that has clothing resembling Everdred's hanging on it. The UFO now has a proper animation for when it disappears, as it flashes and is seen flying to the moon.

Sometimes the Ultimate Chimera appears on the stage: fighters who touch it will get launched at high speed (in Brawl) or instantly KO'd (in Ultimate)

Magicant is the most recent EarthBound universe stage, debuting in Super Smash Bros. for Nintendo 3DS then returning in Super Smash Bros. Ultimate. It is based on Maria's Magicant in EarthBound Beginnings while also having references to EarthBound as well. Fighters fight on four pink clouds arranged with one to the left and right, and one in the middle with a smaller one below it. Flying Men appear on this stage from their house on the right cloud, and one will assist the first fighter to tag him. They are very powerful ally fighters, however if one gets knocked off the stage he will be KO'd leaving a gravestone by the house, and once all five are KO'd they no longer spawn much like in the EarthBound games.

Other objects that appear on the stage are giant tomatoes, the Octopus Statue, Dungeon Man, a giant Mobile Sprout, the Sky Runner. 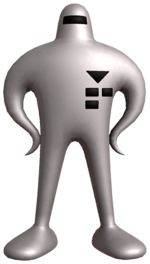 The Starman is another Assist Trophy which was introduced in Super Smash Bros. for Nintendo 3DS and Wii U. When summoned, the Starman will teleport from place to place and fire several PK Beams. It can fire PK Beam γ which is one beam, or PK Beam Ω which fires multiple beams. Defeating it will display the

Mr. Saturn was introduced in Super Smash Bros. Melee as a throwing item. Normally they are very weak, dealing 1% damage and no knockback. However, they deal a massive amount of shield damage and can easily break a player's shield in one throw. 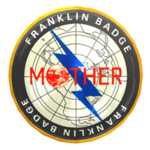 Artwork of the Franklin Badge from Super Smash Bros. Brawl

The Franklin Badge first appeared in Super Smash Bros. Brawl. It is a gear item which when equipped, it protects players from projectiles by reflecting them.

The Ramblin' Evil Mushroom is a new item introduced in Super Smash Bros. Ultimate. It is a shooting item which functions similarly to the Fire Flower, unlike the Fire Flower, the Ramblin' Evil Mushroom instead shoots spores which inflicts mushroomization on the players. Indicated by a mushroom appearing on the inflicted player's head, it mixes up their controls much like how it does in EarthBound.