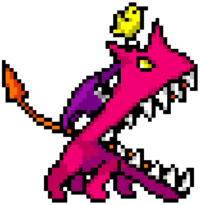 Sprite of the Ultimate Chimera.

The Ultimate Chimera (Japanese: きゅうきょくキマイラ Ultimate Chimera) is a giant red chimera with a small yellow bird on top of it that was created in the Chimera Laboratory in the Murasaki Forest. It is described as a deadly monster that will stalk and murder its victims with its razor sharp teeth, it is so powerful and dangerous that there is no way to defeat it, with those who encounter it have fleeing as their only choice of survival. 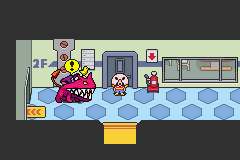 The Ultimate Chimera was part of the Chimera project and was created by Dr. Andonuts, who was forced to work for the Pigmasks against his will, in the Chimera Laboratory. It was designed to be the ultimate killing machine, however Salsa let it out of its cage allowing it to run rampart throughout the lab and terrorize the workers before it's last weakness was removed, the off-button on its back. Unlike other enemies, contact with the Ultimate Chimera does not start a battle, instead it is fatal and results in an automatic game over. Because it can't be battled, it has no real stats. Its only weakness is that it is battery powered, and has an on/off switch on its back, however, there is no way of pressing this button as Lucas.

In the Chimera Laboratory, it makes it's first appearance after Lucas and Boney (and possibly Duster) defeat the Almost Mecha-Lion. The Pigmasks enter a state of emergency when they realize the Ultimate Chimera has still not been contained, and is wandering throughout the lab. The Pigmasks warn Lucas (disguised as a Pigmask) about how big the threat is, saying that should he encounter the monster to run away no matter what.

From here it stalks the narrow hallways and small rooms, and there is no way to tell which room it is currently in. There is a split second chance to run away if it spots the party, however. When it spots Lucas, a yellow exclamation mark appears atop its head and a high pitched ping sounds, charging at him at a fast speed. When it changes rooms, a loud clang is heard as it moves, which is a helpful sign for Lucas if he is trapped in a room.

Once Lucas and Boney corner Salsa and Samba, the Ultimate Chimera also corners them causing Lucas and Boney to flee. While trying to stay alive, Dr. Andonuts informs that it is battery operated, and its only weakness is the off button they were unable to remove. Salsa rushes in just as it's about to attack Lucas and Boney, and presses the button incapacitating the monster.

After Lucas and co. leave, the yellow bird steps on the button and reactivated the Ultimate Chimera, then it escapes into the wild and makes it's way to New Pork City.

The Chimera reappears in the Empire Porky Building, in one of the bathrooms in the bathroom maze. If Lucas knocks on the door, he'll hear the familiar "Ping!". If he knocks again, he charges the door repeatedly, breaking the lock and granting him access. In this room, a single present is inside, although Lucas has only a brief moment to run back into the hallway, and lure the Ultimate Chimera out of the room to obtain the present.

In terms of species, the Ultimate Chimera's origins are left unknown. A chimera is a physical or DNA fusion of different species that are usually easily definable. This is reflected on all of the chimeras found throughout Mother 3, however the exception is the Ultimate Chimera: it's appearance has no actual visible traits of any species. Appearance wise, it is a giant red monster with purple wings and an orange pointed tail, none of which visibly belong to any animal. While it is battery operated, it's physical appearance suggest it to be an organic being that doesn't appear to be fully or partially robotic (further supported by its Smash Bros. models), granted that if it were one it would be a robot or a cyborg and not a chimera, although it could be bio-organic. Overall rather than being a combination of two species, its design appears to be the result of toying with DNA resulting in the creation of a mutant monster. 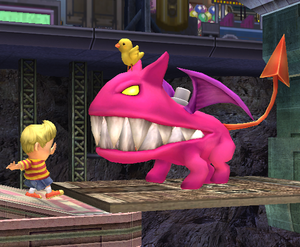 In Super Smash Bros. for Wii U the Ultimate Chimera appears as a Smash Tour item. When selected before a battle, it causes the user to take two fighters instead of just one from the last opponent they KO.

In Super Smash Bros. Ultimate it is once again a Stage Hazard in New Pork City dealing 100% damage when it bites. Unlike in Brawl, it no longer launches fighters at high speed, instead when it bites it will instantly KO the fighter regardless of their percentage. The Ultimate Chimera also appears as a spirit.