There were no EarthBound series games released for the Nintendo GameCube, with the only EarthBound related game being Super Smash Bros. Melee, which features Ness as a playable character and Onett and Fourside as stage.

The system is Nintendo's second console to display 3D graphics. The controllers are similar to the Nintendo 64's except it has two grips instead of three. The controler features the standard A and B buttons, L and R shoulder buttons, a purple Z button above the R button, a normal analog stick, a C analog stick, a d-pad, X and Y buttons and a start button. Like its predecessor it supports up to four player. 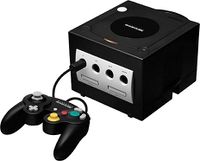