From WikiBound, your community-driven EarthBound/Mother wiki
(Redirected from Super Smash Bros. for Nintendo 3DS)
Jump to navigationJump to search

Ness returns as a playable character in both games, being an unlockable character in the 3DS version, and a default character in the Wii U version. Lucas returns from Brawl, as a downloadable character released on June 14th, 2015. With the addition of customizable characters, Ness gains new possible special moves, some of them, like PK Freeze, coming directly from Lucas' moveset. Additionally, both characters gain new alternate outfits. A demo of EarthBound also appears as a Masterpiece.

Common to Both Games

In addition to the characters above, 5 characters were also released as paid DLC:

Jeff reprises his role of being an assist trophy, while Starman appears as a new Assist Trophy. Jeff fires bottle rockets at enemies as before, while Starman shoots PK Beam at fighters and teleports around the stage.

Like before, the Franklin Badge and Mr. Saturn return as items with the same functions as the preceding games. 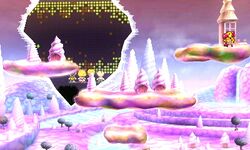 Magicant, as it appears in the game.

Magicant appears as an original stage, being the only stage from the series in the game. The stage is based on Magicant from EarthBound Beginnings.

Flying Man will occasionally appear and help the player who touches him first by attacking the other fighters. When defeated, a grave appears near their house - and only a maximum of five can appear in a single battle, like both the games in which they appear.

Five other objects or characters sometimes appear as platforms: Mobile Sprout, Dungeon Man, the Sky Runner, iron octopus statues (appearing as iron pencil statues in the English version of EarthBound ), and giant tomatoes seen in the EarthBound version of Magicant.

Additionally, the left part of the sky will often "rip open" to reveal scenes from EarthBound and EarthBound Beginnings including:

In this adventure mode, Starman appears as an enemy along with the Psycho Car (Named "Devil Car") from EarthBound Beginnings.

The Onett stage comes back as now the only stage from the series, as the New Pork City stage was removed.

Mr. Saturn, the Franklin Badge, Flying Man, Porky, and the Ultimate Chimera all appear as usable items in this board game mode.

A 5 minute demo version of Earthbound is unlocked when a score of over 1969 ft. is achieved in Home-Run Contest mode.

Three new remixes were made for the games: Magicant/Eight Melodies, Smiles and Tears, and Onett/Winters Theme. Other remixes that return:

Smashwiki:Super Smash Bros. for Wii U