This article is about the video game. For the series, see Super Smash Bros. (series).

Super Smash Bros. (Japanese: 'ニンテンドウオールスター! 大乱闘スマッシュブラザーズ', Nintendo All-Star! Great Fray Smash Brothers) is the game that began the landmark fighting series Super Smash Bros. It was originally released in Japan for the N64 on January 21, 1999, in North America on April 27, 1999, and in Europe on November 19, 1999. In 2009 it was re-released for the Wii's Virtual Console. Featuring representation from many different Nintendo franchises, it is not considered as part of any of them, but a separate one instead. The game represents the EarthBound series with Ness as a playable character.

The game features a total of twelve playable characters, four of which must be unlocked by fulfilling certain conditions. Bold denotes EarthBound characters.

There are 9 playable stages stages in this game that can be played in all modes, 1 of which needs to be unlocked by playing the 1P game with the 8 starter characters. There are no EarthBound stages.

Unlockable stages are shown in italic.

The single-player mode. The player can play in the 1P Game, Bonus Practice 1 and 2, or the Training Mode.

Also referred to as Classic Mode, the player has to go through a series of 12 different matches and 3 bonus stages. This is the only mode where you fight non-playable characters. The matches are as follows:

The player has to break 10 targets in a specific character's assigned stage before time runs out.

Bonus Practice 2 - Board the Platforms

The player must stand 10 on platforms in a specific character's assigned stage before time runs out.

Bonus Stage 3 - Race to the Finish

The player must make it to a door in one minute while avoiding 2 hazardous areas and 3 Fighting Polygons This bonus stage can only be played in 1P Game.

A mode used to practice fighting with a wider selection of customizable options than in Vs Mode.

The multiplayer mode. In this mode the player can face 1 to 3 other players or CPUs with a few customizable options. It's the only mode that other people can play.

There's a time limit set to fight. The limit can be set in 1 minute increments from 1 to 99 minutes. If 2 or more players tied once time is up, the tied opponents have to fight in Sudden Death mode. The player with the most KOs wins.

Each player has an amount of lives. The stocks can be set from 1 to 99. Once one player loses all of his or her lives, they are out of the match. The last player standing wins.

This can either be Time or Stock Team modes. Everyone's in a specific team. The players in the same teams can't hurt each other. The team that earns the most points or is the last one(s) standing wins. There's 3 colors of teams: Red, Blue, and Green. In Team Stock Mode, if a player has lost all of his or her stocks, another player from their team can give them another live from one of theirs until they all have one life. 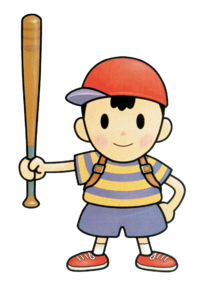 EarthBound's main representation is in the form of Earthbound's protagonist Ness, who makes his debut in this game as an unlockable fighter. He can be fought on Dream Land after clearing Classic Mode on normal difficulty with 3 stocks or less without continuing.

Although a lot of Ness's moves are original, he does have some references to his home series. His smash attacks involve the use of his yo-yo and baseball bat, weapons that Ness can equip. All of his special attacks are also based off of PSI moves: his neutral special is PK Fire, where he shoots out a fiery projectile that can trap opponents; his up special is PK Thunder, where he summons a stream of lightning that can me moved around the stage, as well as acting as his recovery when launched into him; and his down special is PSI Magnet, which allows him to absorb and heal from energy-based projectiles. Ness cannot learn any of the PSI moves that he uses in Smash.

Aside from Ness, the only other representation EarthBound has in Smash 64 is Ness's victory fanfare, which is based off of the last four melodies from EarthBound's Eight Melodies.