From WikiBound, your community-driven EarthBound/Mother wiki
(Redirected from Empire Pork Building)
Jump to navigationJump to search

The Empire Porky Building is the tallest building in New Pork City, consisting of many floors.

The lobby of the Empire Porky Building contains a hot spring and a Mole Cricket shop. An elevator that travels between all of the floors is located on this floor, but it is broken upon the first visit. After Lucas hears Leder's speech, the elevator is somewhat repaired, only allowing access to the 24th floor. 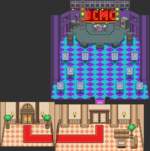 The 24th floor of the Empire Porky Building contains a small lobby and a stage. A crowd of DCMC fans, including the Pork Trooper, can be found in the lobby. When Lucas's party enters the concert hall, DCMC welcomes them, and Duster temporarily becomes the lead character. He then performs onstage with the DCMC. The power supply in the room then shuts off, stopping the concert and upsetting the fans. Porky then calls Lucas's party to the 100th floor.

When Lucas's party arrives, they find that they are not on the 100th floor, but a jungle-like floor filled with Hippo Launchers. Midway through the floor, a scientist orders a Hippo Launcher to attack Lucas's party. After it is defeated, the scientist runs off. A present containing the Ultimate Shoes, Duster's best weapon, is located here. Upon reaching the end of the floor, Porky taunts them, and orders them to go to the real 100th floor. They then continue into the next elevator.

Lucas's party then arrives at the next floor, only to find it to be a large maze made entirely of bathroom stalls. The Ultimate Chimera can be found in one of the stalls, guarding the Awesome Ring. Upon reaching the end of the floor, Porky taunts them yet again, and they continue into the next elevator.

Lucas's party arrives to find an incomplete floor filled with construction materials. A present containing the Angel Gloves, Kumatora's best weapon, is located here. Because the floor is incomplete, Lucas must ram into workers using the B button and use them as a bridge. Upon reaching the end of the floor, Porky taunts them yet again, and they continue into the next elevator. 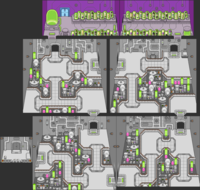 Lucas's party then arrives in a laboratory-like room. A present containing the Canine Weapon, Boney's only item that he can equip in the weapon slot, is located here. Near the end of the floor is the Nice Person Hot Spring, a series of laboratory tubes used to brainwash people into loving Porky. Porky taunts them yet again, but rather than an elevator, a door leading to a large staircase is there instead.

Upon climbing the stairs, Lucas's party finds the chauffeur who drove them to New Pork City in his limousine. He explains that in order to meet Porky, Lucas must compete in a few games against Master Mini-Porky to prove he is worthy to meet him. The first game is Super Whack-a-Mole, a simple whack-a-mole game. If the player hits the man instead of a mole, they lose. To progress, Lucas must hit a total of 9 moles, allowing Master Mini-Porky to win by a single mole; otherwise, he is deemed too frightening to meet Porky.

The next floor is another game, the Purple Bridge Race Game. In this game, Lucas must race Master Mini-Porky along a long purple bridge. If Lucas wins the race, he is deemed too excitable to meet Porky. To progress, Lucas must lose by only a few seconds.

The next game is To Whom Goes the Boom, a game in which the competitors see who can pop a balloon using an air pump first. If Lucas wins, he is deemed too tough to meet Porky. To progress, Lucas must finish popping his balloon only a few seconds after Master Mini-Porky.

After finally arriving at the true 100th floor, Porky taunts Lucas's party again, and they find the floor to be a trap. The Natural Killer Cyborg then attacks the party. After it is defeated, Lucas's party enters a long hallway, in which the title screen music from EarthBound Beginnings plays. The next room contains a small body of water with a boat shaped like a house in it. Along the body of water are various objects from EarthBound, such as the sesame seeds, Tessie, and an ATM, while a variation on Pollyanna plays as the background music. Upon reaching the door at the end, Lucas finds Porky. He then asks him to be his friend, but no matter his answer, he then explodes. A horde of Porky robots then fall from the ceiling. After defeating them, more drop down. DCMC then destroys them, and the villagers of Tazmily Village all gather around. The real Porky welcomes all of them, and tells Lucas it is a race to the final Needle. An elevator in the floor then drops down Lucas's party, and Flint with them.