Osohe Castle is an important location in Mother 3. It is located outside of Tazmily Village, and past the graveyard. Osohe Castle is also the main setting for Chapter 2. 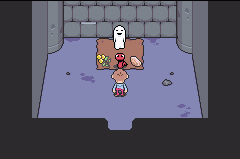 It is a very large castle, haunted by various ghosts inside. Many of the rooms are in ruins, such as large gaps in the floor or piles of debris blocking paths. As such, one must use unconventional methods to fully explore the castle.

Osohe Castle is known for the ghosts within, ranging from simple but hostile ghosts to poltergeists, and to friendly ghosts. The friendly ghosts frequently hold dinner parties in the dining room, and treasure Rotten Eclairs. They use rotten eclairs either for trade and barter, or as a food. One of the ghosts owns a bazaar, selling either Fresh Mints, Beef Jerky or a Rope Snake.

There are two enchanted doors inside of the castle, and can only be opened by doing a specific dance. Only a handful of people know and can perform the dance, such as Wess and Kumatora. However, Salsa also learns how to do the dance by closely observing the figures depicted on the nearby wall. These doors lead to secret areas, with one door leading to the basement and another leads to the upper levels of the castle. Inside of the basement, one door eventually leads to the Needle hidden away in the castle. Meanwhile, on the upper levels of the castle, various enchanted brooms lurk about and sweep away anyone in their way, putting them in a trash can on one of the lower levels. On one of the highest floors of the castle is the Egg of Light, which is closely guarded by various traps.

Osohe Castle has been on the Nowhere Islands for a very long period of time, even before the White Ship had arrived on the islands. The islands had once been ruled by the king of Osohe, although the kingdom seems to have been abandoned for an unknown reason. Kumatora's role in Tazmily Village's story is to be the princess of the castle.

The castle has many important objects inside of it, such as the Egg of Light or the Noble Spittoon. Wess had set up many traps inside of the castle to protect the Egg of Light from being stolen, as it was a very crucial item in keeping the townspeople's old memories from coming back. Either Wess or Duster were to retrieve the egg in case of emergencies, as they were the only ones who knew how to deactivate the traps.

"No one knows when this old, mysterious castle was built. Wess is said to have served here many years ago."

New on the second trip in Chapter 2

A character intended for use debugging the game has been discovered in Osohe Castle's script file. A proper method of activating the NPC is not clear; however, a method using the main Debug Room has been discovered. The NPC is intended to be used to teleport to various parts of Chapter 7.[1]

By going to Duster in the Debug Room, going to the right four times, selecting that option and leaving Oshoe Castle, by the grate to the right there'll be Doria, ready to take you to parts of chapter 7 associated with Doria! By going back to the Debug Room, going to Chapter 7, event “Cross Road", going back into the debug room and going to Chapter 2, event “Osohe Castle”, using the walk-through-walls code (0200C492:FFFF), next to the drawbridge, other Magypsies shows up, taking you to other chapters of the game.[2]