Anti-piracy in the Mother series

The Mother series has a history of including anti-piracy measures to discourage counterfeiting of the games.

The unreleased American prototype of Mother, "Earth Bound", had its ROM dumped by Neo Demiforce, a fan translation group. In order to make the ROM image compatible with NES emulator Nesticle, the group had to alter a single byte in the ROM; doing so, however, caused a checksum to fail and activated an anti-piracy screen. Further hacks were then added to the ROM before its distribution became widespread, which included a means of circumventing this screen.[1]

EarthBound has many different ways to prevent piracy. The first and simplest one will check to see if the game is being played on a PAL console. If it is, the game will display a screen saying "This game is not designed for your Super Famicom or Super NES." After that, the game will check to see if the part of the cartridge that holds save files has less than 8KB of SRAM, since bootleg copies usually have more. If it does, the game will display an anti-piracy screen and then freeze. If the game is hacked to pass this screen, the game will display many more random enemies in an attempt to make the game less enjoyable, sometimes even adding enemies which normally don't appear in an area. Additionally, entering certain areas, such as the Twoson-Threed tunnel, will freeze the game. If the player manages to make it through this much harder version of the game, during the final boss fight with Giygas, the game will freeze and force the player to reset. When the player does, they will find that their save files have been completely deleted.[2]

In the Mother 3 fan translation 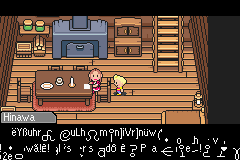 The Mother 3 fan translation added anti-piracy measures involving its disclaimer screen. If it is altered graphically, it causes the main text routine to print out garbage letters, making changing the screen pointless as it renders the translation unreadable. If the screen is instead removed or bypassed, it causes the game to freeze and screech, rendering the game entirely unplayable. [3]