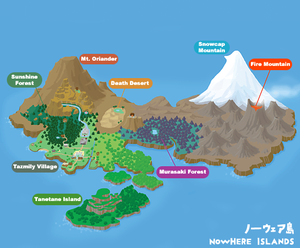 Artwork of the Nowhere Islands.

As the name implies, the Nowhere Islands is a group of islands in a very remote location. There is one large island which is civilized and where most of the game takes place, the majority of the island is forests and mountains. The southern portion is where Tazmily Village is located, it is the only town on the islands. To the north of the town is an ancient castle, and west of it the Sunshine Forest. The forest continues north up to Mt. Oriander, a tall rocky mountain. The Drago Plateau is located on Mt. Oriander, it is where a race of friendly reptiles named Dragos live. Somewhere in the center of the islands is a small desert known as Death Desert.

East of Tazmily Village is a large forest known as the Murasaki Forest, which is at the foot of another mountain. Fire Mountain is a large volcano, and beside it is the Snowcap Mountain, the tallest mountain on the islands which as the name implies is capped with snow. South of the main island is a small, uncivilized island known as Tanetane Island. This island is mostly jungle like, a small mountain is also located here.

Unlike the previous regions, the Nowhere Islands is not based off of a real-life location, but is instead a small island that remained after a cataclysm wiped out the larger world. Before the events of Mother 3 took place, there existed a larger world. It is never specified what world this was, but it was much larger and advanced compared to the Nowhere Islands. A cataclysm destroyed this world, it is believed to have been caused by the lifestyle of the people living in this world. A select few foresaw the destruction happening, and so they boarded the White Ship to escape.

The ship arrived on the Nowhere Islands, which was protected from the destruction by the Dark Dragon, which is approximately at the same size of the islands. The people of the White Ship believed that in order to prevent another cataclysm, they should clear their memories of the previous world and start a new life beginning in Tazmily Village on the Nowhere Islands. Everyone was assigned a "role" in the village to create a "story" of the history of the islands. Eventually the people realized the Dark Dragon could not co-exist with them, and so it was put to a deep sleep below the islands and sealed away by the Seven Needles, which are guarded by the Magypsies. The Dark Dragon can only be awakened by those who have the ability to pull the Needles, and will grant the wishes of whoever pulls the Needles.

"This won't be easy to believe at first... But it is said that deep in the earth below these islands lies an enormous sleeping dragon. It isn't the lovable Drago from the forest, and it isn't the poor, modified Mecha-Drago, either. It's the Dragon from the legend, or so they say."

The Nowhere Islands is mentioned in several trophies throughout the series. Lucas's reveal trailer references the Nowhere Islands by saying he came "out of nowhere", plus Lucas is referenced as the "Boy from Nowhere" in the American versions of Super Smash Bros. for Nintendo 3DS and Wii U and Ultimate on the Boxing Ring stage.