A Mole Cricket first appears in the prologue, after Lucas and Claus play with the Dragos. This Mole Cricket serves as the first battle in the game, and upon defeat, Hinawa accidentally steps on it, although it is shown later that he has recovered from his injuries since then. In Chapter 7, the same Mole Cricket appears again, with the exact same stats as its first appearance. After being trounced, the party befriends the Mole Cricket, and afterwards, Lucas travels through the Mole Cricket Hole to get to Snowcap Mountain, and befriends the rest of the mole cricket tribe on the way. From this point on, he will also encounter various mole cricket shops, selling various items and equipment, including their exclusive and astoundingly sincere Sincerity Dumplings.

"Friend or foe? Even when flat broke and stepped on, this imitable bug is always optimistic." 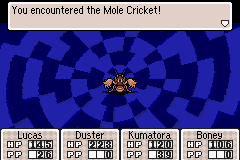 In battle with a Mole Cricket
Retrieved from "https://wikibound.info/w/index.php?title=Mole_Cricket&oldid=38677"
Categories: