Locria is one of the seven Magypsies in Mother 3. He is the last to have his Needle pulled, and unlike the other Magypsies, has never appeared in person. He is named after the Locrian mode of music.

Although he is not seen in-game, a mouse outside of his house in the Empire Pork Building mentions that other people considered Locria a bad or intimidating person. 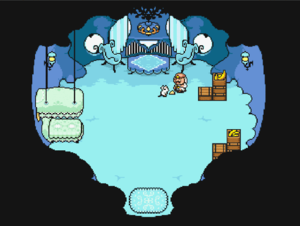 Locria guards the Needle concealed deep under New Pork City. He was the only one to know of its location, as even the other Magypsies did not know where his Needle was located. His house is located on a floor in the Empire Pork Building, and contains many different bananas inside of it. By the time Lucas has reached his house, however, a memento lies on a table inside, along with Fassad’s horns and clothes implying that Fassad was simply Locria in disguise.