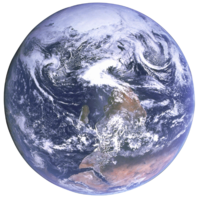 The Blue Marble is a famous photo of Earth taken on December 7, 1972 at 05:39 a.m. EST (10:39 UTC) taken by the crew of the Apollo 17 spacecraft on its way to the Moon. It is one of the most reproduced images in history and is the official symbol of the EarthBound series.

The image has the official NASA designation AS17-148-22727 and mainly shows the Earth from the Mediterranean Sea to Antarctica. This was the first time the Apollo trajectory made it possible to photograph the south polar ice cap, despite the Southern Hemisphere being heavily covered in clouds. In addition to the Arabian Peninsula and Madagascar, almost the entire coastline of Africa is clearly visible. The Asian mainland is on the horizon. The image is one of the few to show an almost fully illuminated Earth as the astronauts had the Sun behind them when they took the image.

The photograph was taken about 5 hours and 6 minutes after launch of the Apollo 17 mission,and about 1 hour 54 minutes after the spacecraft left its parking orbit around Earth, to begin its trajectory to the Moon. The time of Apollo 17's launch, 12:33 a.m. EST, meant that Africa was in daylight during the early hours of the spacecraft's flight. Antarctica was also illuminated due to the December solstice approaching.

The Apollo flights were heavily scheduled down to the minute, meaning none of the astronauts were scheduled to take the photo. As the astronaut who took the photo was in a rush, the continents were hard to see. As a result, he held the camera upside down when the photo was taken resulting in the south pole to the top as opposed to the other way around. The widely published versions are cropped and inverted from the original photographs to properly match north and south.

Apollo 17 was the last manned lunar mission. No human since has been far enough from Earth to photograph a whole-Earth image such as The Blue Marble, but whole-Earth images have been taken by many unmanned spacecraft missions.

The Blue Marble was not the first clear image taken of an illuminated face of Earth, since similar shots from the ATS-3 satellite had already been made as early as 1967. The Apollo 17 image, however, released during a surge in environmental activism during the 1970s, became a symbol of the environmental movement, as a depiction of Earth's frailty, vulnerability, and isolation amid the vast expanse of space. NASA archivist Mike Gentry has speculated that The Blue Marble is among the most widely distributed images in history.

In the EarthBound series 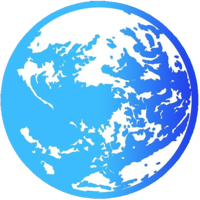 The EarthBound symbol as it appears in games