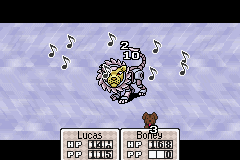 Boney comboing to "Wasteful Anthem" against the Almost Mecha-Lion.

When a character uses their basic attack command, pressing the A button or L button in time with the beat of the music will allow them to achieve extra hits, which are each weaker than the initial hit. To hear the exact timing to press the button, an enemy must be asleep, which allows the player to hear their heartbeat, with each beat representing when to hit the button. A character can get a maximum of 16 hits per-turn; if this occurs, a sound effect of a cheering crowd is played. The Battle Memory is a method to practice Sound Battles.

Each playable party member has a different instrument for their combo attacks.

"Press the button with the music rhythm, whaddya get? A feeling so enlivening you'll never forget!"