From 18:00 Jan 23 to 00:00 Jan 24 NY Time (6 hrs), Grifkuba sites will experience flaky behavior, including short periods of downtime. Reading and light edits should be fine, but save all work and avoid heavy edits.

From WikiBound, your community-driven EarthBound/Mother wiki
(Redirected from Fake Bat)
Jump to navigationJump to search

Baseball bats are used as weapons in all of the EarthBound games, primarily in the first and second games. They are mainly used by Ninten and Ness, and occasionally Lucas. Their main purpose is to increase a character's Offense, although some bats have additional effects.

The baseball bats in EarthBound Beginnings are equippable items that only are usable by Ninten. There is a total of four different bats that can be obtained throughout the game, with varying Offense increasing values.

Similar to EarthBound Beginnings, the baseball bats are Ness's primary offensive weapon, and can only be used by Ness. There are a total of 13 different bats with varying offense increasing values, with a select few also having additional effects.

Unlike the previous two games, Lucas's primary weapon are instead Sticks and there are only two baseball bats that can be found in Mother 3: the fake bat and the real bat, both of which are only usable by Lucas. 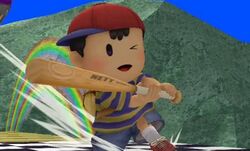 In the Super Smash Bros. series, Ness uses a baseball bat for his forward smash.

Ness uses a baseball bat for his forward smash in all six of the Super Smash Bros. games. His bat is not designed after a particular bat in the EarthBound series, it appears as a wooden baseball bat that has the words "Nett sports" inscribed on it. Throughout the series the tip of his bat is the strongest part, where it deals the most damage and knockback compared to other places, whereas the weakest part is towards the handle. It also has a unique property where it will reflect projectiles with correct timing. 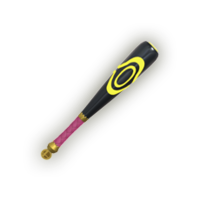 The Home-Run Bat as it appears in Super Smash Bros. Ultimate

While not listed as an EarthBound series item, the Home-Run Bat is often said to have been based off of the bats from the EarthBound series. The Home-Run Bat acts as a normal battering item when used normally, however when using a forward smash while holding it, the player will perform a short wind-up and then swing. Because the wind-up often causes the player to miss an opponent, it is very difficult to hit an opponent this way. However when using the Home-Run Bat this way, it deals massive knockback to an opponent hit with it, making it an almost guaranteed one-hit KO attack. Much like Ness's bat, the tip is the strongest point and the handle is the weakest point.

hit, in particular Ninten and Ness as they primarily use baseball bats, as a

is much more powerful than a regular hit. In addition, it is also possible that the difficulty in landing the one-hit KO hit with the Home-Run Bat is based off of the Casey bat, as the Casey bat's low accuracy causes the player to miss most of the time, however it also has the highest offense increasing value of all the bats in the game, allowing it to one-hit KO enemies often.