ROM hacks and fangames are video games that have been created by enthusiasts by either hacking and modifying the games ROM (Read-Only Memory) or by creating them from scratch. The EarthBound series has seen it's fair share of several ROM hacks and fangames which can range from simple hacks such as balance changes, or large-scale fan games.

All ROM hacks and fan games are unofficial and have not been involved with or approved by Nintendo in any way.

The disclaimer page of the fan translation

One of the most famous ROM hacks in the EarthBound series is the Mother 3 fan translation created by Clyde "Tomato" Mandelin, which released in October of 2008. The hack was created when it was seen that Nintendo had no plans for releasing an English translation for Mother 3 and as a result, a group of fans decided to translate the games themselves. The hack has all of the dialog of the game translated into English along with various minor changes and bug fixes. The fan translation has recieved strong critical acclaim even from professionals, and has recieved at least 100,000 downloads during the first week of its release. 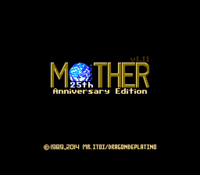 Mother: 25th Anniversary Edition is a ROM hack for EarthBound Beginnings/Mother released in 2014, which was created by DragonDePlatino that is aimed to make it more enjoyable for first time players. The story and gameplay remains faithful to the original game, however the game recieved a large graphical overhaul and various other tweaks to create a more enjoyable experience. The hack uses the translation from Tomato's Mother 1+2 fan translation.

The overworld itself has also recieved changes in order for players to not get lost as easily. The overworld is now more brighter and colorful aesthetically with more scenery akin to the other two EarthBound games. Several maps have been redesigned to balance out the game, for example making Duncan's Factory more simple to prevent the player from getting lost, and, conversely shorter areas such as the South Cemetery and Magicant Underground being lengthened, to be more challenging.

Other minor tweaks were added to balance out the difficulty from the original: Enemy encounter rates were reduced, and in turn, enemies now yield more experience points when defeated. When new party members are obtained they are now met at a higher level so that the player would not have to grind up a level 1 party member. 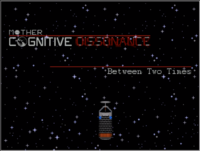 Also shortened to Mother: CogDis and full name being Cognitive Dissonance: Between Two Times, Mother: Cognitive Dissonance is a fan game created by otherhand that takes place in the timeline between EarthBound Beginnings and EarthBound. It follows the story of group of aliens known as the Applechasers, who travel across the Solar System to search for and protect the Apple of Enlightenment, that has prophesied the defeat of the alien army's commander, Giegue, at the hands of four Earth children. The game plays with a chapter system similar to that of Mother 3.

The plot begins in 198X shortly after Giegue was defeated by Ninten and company. On the planet Saturn a blue Mook named Alinivar is forced to flee his cave after a meteor crashes, and shortly after his paintings and flora come to life. Giegue then breaks out from the meteor and kills Alinivar and a neighboring Mr. Saturn. Alinivar wakes up in a grayscale landscape and hears a voice (later revealed to be the Apple of Enlightenment) that offers to resurrect Alinivar if he is willing to embark on a journey to protect its pieces from Giegue, who it prophecies will lose control of his powers and become the universal cosmic destroyer Giygas. The Apple of Enlightenment grants Alinivar the power of PSI for him to use on his journey.

Alinivar then travels across the Solar System and meets three friends who join him to form the Applechasers: a Mr. Saturn named Colonel Saturn is an old Rock War veteran; Larice, a Starman who was formerly deactived until he wakes up aboard the Mothership, who then betrays the other Starmen to help Alivinar; and Zarbol, an incectoid ailien who is eventually revealed to take the role of Buzz Buzz. The Applechasers travel across the Solar System to find the eight Points of Power, which are the eight pieces of the Apple of Enlightenment. A major character in the game is Niiue, who is first introduced as the second in command of Giegue's army, he guides the Applechasers on their mission serving as a mentor. Later it is revealed that Niiue is actually a manifestation of Giegue's compassion and other human emotions, ejected from him following the latter's battle with Ninten and his friends on Earth. At the endgame the Applechasers reach the location of Giegue, but Niiue and Zarbol stay behind so that Zarbol can travel 10 years into the past to warn a child of the soon destruction of the world. The others battle their way through the barriers of Giegue's mind, and are once again joined by Niiue as they confront Giegue at the unfinished Devil's Machine.

Giegue begins to lose control, destroying his mind and physical form and becoming Giygas, the universal cosmic destroyer. From here the actions of the player determine the outcome: in the"bad ending" the Applechasers are all killed and the events of EarthBound unfold. The "good ending" occurs if the plsyer successfully reached the eight Points of Power. Alivinar learns PK Harmony, using it eight times will restore Giegue back to his sane state where he is no longer evil. He and Niiue then express their thanks and use a mysterious power to erase all of the evil actions of Giegue. There are also other unique endings which can be reached, usually by making unique choices in the final battle: some being a "paradox ending", a "joke ending", and a "severance ending". 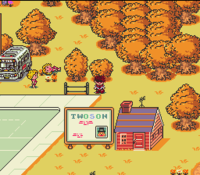 The overworld of the Halloween Hack showing the protagonist, Varik.

EarthBound: The Halloween Hack, also known as Radiation's Halloween Hack and sometimes informally "Press the B Button, Stupid!", is a ROM hack of EarthBound created by a 16-year-old Toby "Radiation" Fox and released in 2008 for Starmen.net's Halloween Funfest. This hack is notable for changing EarthBound's generally lighthearted tone into a dark and disturbing experience while containing profanity and mature themes, which Fox attributed years later to a desire to make the hack seem more "mature." Gameplay-wise, it plays the same as EarthBound.

The story takes place in an alternate timeline from EarthBound where Ness and his friends don't return. The protagonist is Varik from the Brandish series, from which the game took inspiration from. Varik is tasked with killing a monster who killed a young girl's mother. Varik begins his journey in Twoson and continues through the dark sewers as well as Winters-the "land of doom".

Varik then reaches Dr. Andonuts which then he is given the option to kill him. However, "yes" is the only option, as the other option is blank and choosing it makes the narrator say it's not a choice and return to the selection screen. Choosing yes makes Varik kill Dr. Andonuts and makes the game end early. If the player presses the B button, like the game's alternative title encourages, Varik goes into Dr Andonuts's mind, which is an alternate variation of Magicant. From there, Varik finds Dr. Andonuts's lost courage, fighting three bosses and gaining Paula, Jeff, and Poo in his party and proceeds to an alternate version of the Sea of Eden called the Sea of Eve.

From there Varik and the team reach an area that uses Twoson's map and enters Dr. Andonuts's brain. They reach Dr. Andonuts who has a different more horrifying appearence. Varik first defeat Dr. Andonut's ID which does not attack, then Dr. Andonuts transforms into a new form which has a blue glow around him and uses powerful attacks. When Varik and his party defeat him, the narrator mentions that he didn't really have to kill him (although this is not true - as killing Dr. Andonuts is the only way to reach the end of the hack). The hack ends with a ghost pooting on Varik's face to provide an anticlimax and Toby Fox thanking the player for playing the hack.